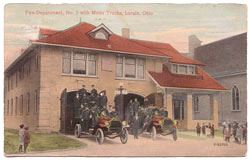 Lorain’s first fire company was formed on March 22, 1883. It was composed of four men from the village. The village council provided the men with one hand pulled hose reel as the only fire apparatus. This first company was named the “Eagle Company.”

As the village grew, so did the fire department, with a second company being formed in 1895. They called themselves the “Tiger Hose Company.” This was one year before Lorain became large enough to become a city. 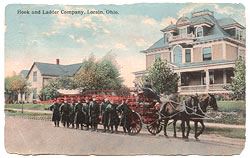 A third company was formed in 1896. This company was located in the steel plant district, and was called the Tom L. Johnson Company.

In 1899 the fire chief became the first paid firefighter. 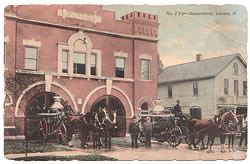 Company number 4 was formed to protect the eastside of Lorain in 1900.

Over the next 10 years the Lorain Fire Department would become a paid service staffed with professional firefighters. A total of seven fire stations would exist.

In 1912 the city purchased it’s first motorized fire apparatus, a Seagrave truck. This was quickly followed by a hook and ladder truck in 1912. Additional motorized equipment would follow.

In 1919 the city installed a Gamewell Alarm System which remained in service until 2002.Progress resulted in the replacement of the department’s horses. Company Number 1’s horses were replaced first, followed by Stations 4, 5, 6, 7 and finally 8 in 1929.

The Lorain Fire Department continues to adapt and change, implementing new training and equipment as it becomes available, allowing us to better serve and protect the citizens and businesses of Lorain, Ohio