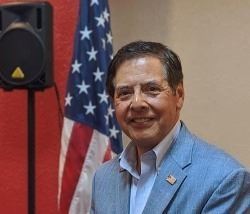 Since 2004, David has been an election night analyst for WEOL Radio and also serves as their resident conservative commentator.

From 2008-13 he was a Guest Panelist on the Feagler and Friends Show on WVIZ Cleveland.

For many years David has written guest columns for the Lorain MorningJournal, Elyria Chronicle Telegram and Cleveland Plain Dealer as well as for national magazines such as the Atlantic.

David Arredondo’s life work was in education beginning as a substitute teacher in the Lorain City Schools. From 1988-2000 he served as Coordinator of International Admissions for Oberlin College and from 2000-2014 he was Director of International Admissions for Lorain County Community College. Over 26 years he recruited, admitted, and supported hundreds of students from more than 50 different countries. During this time he visited 35 different countries mostly in Asia, the Middle East, and Latin America.

He did post-graduate studies as a Mexican Government Scholar at the National Autonomous University of Mexico, Mexico City in the school of Political and Social Sciences, 1973-74. He is fluent in Spanish and has studied German, Italian and Portuguese.

David and Michele are members of Nativity BVM Catholic Parish where both serve as lectors and Eucharistic Ministers. David is also a cantor and choir member